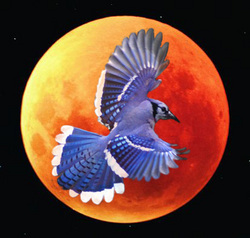 For a long time now, I've been flying in the Otherworld as a magpie. This past May, however, I now become a bluejay. Jays are in fact related to magpies, in that they are both corvids. I remember finding a nest of baby jays that had fallen out of a neighbor's garage. Soon, all us kids on the street were crouched around a cardboard box containing the three fledglings, trying to feed the little ones worms.

I really like the contrast of red/orange and blue in this piece--it has a synergistic effect, making each color more intense. 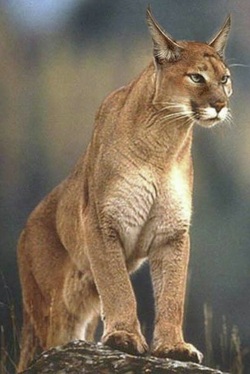 One of the most interesting thing about the Vanic Tribes is that their attributes do not necessarily correlate directly with creatures here on Midgard.  The "Pumacal," a combination of Puma and Caracal, is but one such example.

Frey Amongst the Wheat 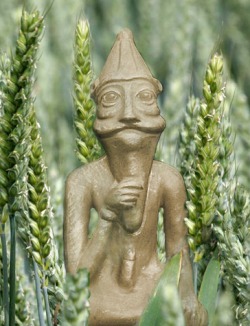 The ubiquitous Frey statue, with eyes replaced by those of the sketch below.  Nothing quite says fertility like a field of wheat! 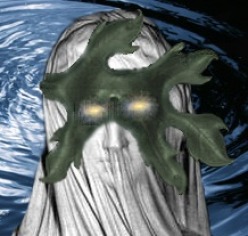 From my own experience, sometimes I've encountered Nerthus wearing a foliate mask.  She is always still veiled, but I think she likes the medieval innovation in iconography.

The base is the Veiled Virgin, a 19th century state by Italian sculptor Giovanni Strazza.  The leather foliate mask is by Larry Wood. 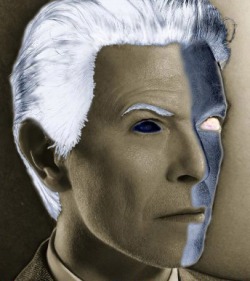 Gwynn ap Nudd (White son of Dark) is the leader of the Wild Hunt in Welsh tradition.  He is king of the fae and dwells beneath the Glastonbury Tor.  According to the legends, his face is blackened; however, for some reason, I've only ever seen him with half of his face darkened.

The cover for David Bowie's Heathen album was the base for this piece.  There's just something otherworldly about Bowie's features that make him the perfect model for Gwynn. 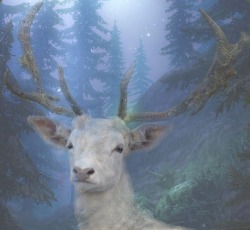 An attempt at recreating an image from a dream:
Walking towards me from downhill is the largest elk I've ever seen. It's pure white and instead of horns, has arcing, lichen-covered tree branches growing out of his head. Instead of normal, delicate deer-like hooves, he has instead the sturdy furry feet of a draft horse. 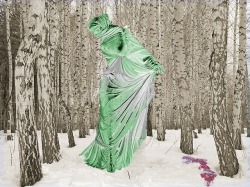 One of the most dynamic pieces of sculpture in the ancient world is a little sculpture of a veiled dancer from the Hellenistic period.  She is exactly how I imagine Nerthus moving through the wood.  The bloodstain was inspired by Trú Spirit's song, "Blood on the Ground."