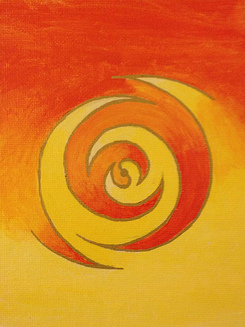 2013. Acrylic and marker on canvas board. 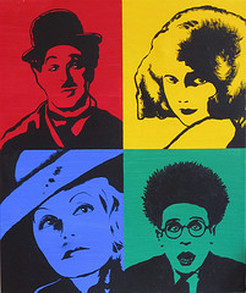 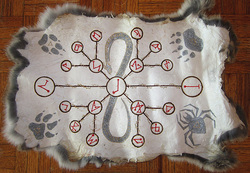 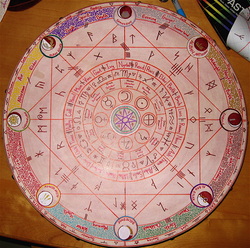 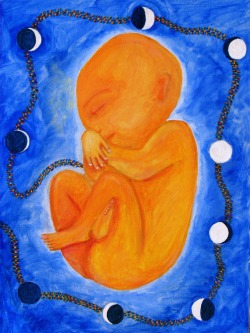 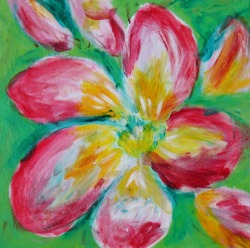 This painting was an incredible exercise in inspiration for me. I started out trying to be photo-realistic, left-brained accurate, but ended up with an anemic flower and a ton of frustration. Finally, I adopted a "screw it!" attitude and started dipping my fingers in the raw paints and mooshing them around. I realized that I didn't want to paint apple blossom, I wanted to paint Spring, in all its vitality. Once I let go of what I thought I should do I was quite pleased with the final results!

Moon in the Water 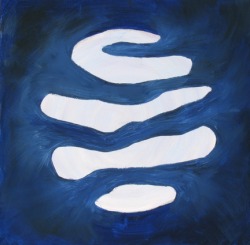 In the tarot, the Moon represents the waters of the unconscious. At the best of times, the unconscious can be a murky place, full of shadows and hidden creatures.  In the Western esoteric tradition, the moon is associated with emotions and the feminine parts of the psyche, hinted at by the spiral held within her orb.  The light of the moon is reflected in the threatening, inky waters of the mind--a guide into the unknown, and even madness, for those who would seek her.

This painting is the second contribution to an online tarot deck organized by the Druid's Head Pub. 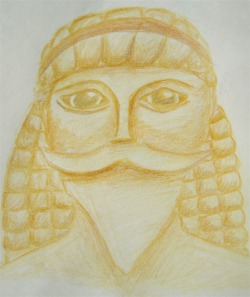 I was searching for an image to include on the Frey Shrine, but I didn't find anything that really seemed to be just right--which of coure inspired me to try my own hand at capturing his essence.  While I don't think this is exactly right either, the process of creating it was a step in the right direction.  The face is based on that of the standard Frey statue, while the hair was inspried by that of several Greek kouroi.  There's something very Frey-like about the kouroi, and even though they are from completely different cultures, the two styles blended together quite nicely. 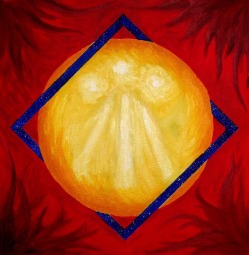 Within the symbolism of the Tarot, the Sun represents energy and creativity, shown through the swirling pattern of the Awen. The Sun can also mean carrying out the work of the bard, so I incorporated the circle and square symbolism of the Bardic Grade. The starry blue of the square, representing the ordered universe, brings cohesion to the tendrils of chaotic creativity surrounding it, thus giving birth to the firery and swirling inspiration of the Sun.

This painting is a contribution to an online tarot deck organized by the Druid's Head Pub.